Fans have been rooting for the Bigg Boss couple Ieshaan Sehgaal and Miesha Iyer but just like many others in the past, this couple too has decided to part ways. While the duo gave statements to the media, Ieshaan also posted a long note for his followers, fondly referred to as Ishaanians. The reality show star poured his heart out to his fans wherein he also mentioned that he had wished his relationship with Miesha was long-term. 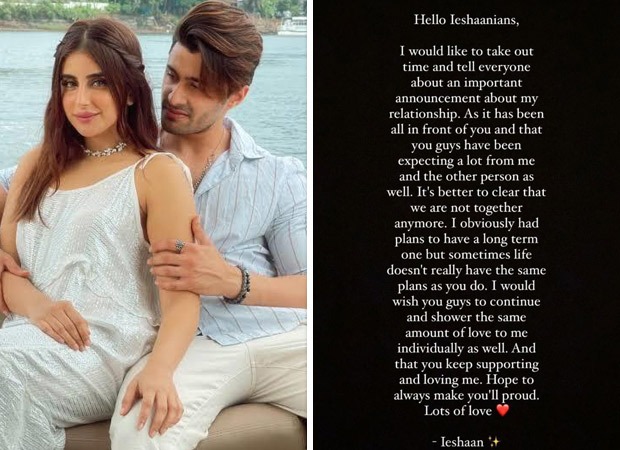 In the note shared on Instagram, Ieshaan Sehgaal said, “I would like to take out time and tell everyone about an important announcement about my relationship. As it has been all in front of you and that you guys have been expecting a lot from me and the other person as well. It’s better to clear that we are not together anymore. I obviously had plans to have a long term one but sometimes life doesn’t really have the same plans as you do. I would wish you guys to continue and shower the same amount of love to me individually as well. And that you keep supporting me and loving me. Hope to make you’ll proud. Lots of Love <3 - Ieshaan” he signed off.

He also confirmed his breakup to Hindustan Times adding, "She wanted different things from life, and so did I. The circumstances of the show were very different. I was very much invested in the relationship. When we came out of Bigg Boss house and returned to the real world, it was very much different from what we were facing inside the house. I think it is good that we broke up.” On the other hand, his former girlfriend Miesha Iyer too shared to Etimes, “Yes, it’s true. We have parted ways. Things didn’t work out. I don’t want to divulge much details.”

Akshay Kumar sells off his Andheri property to...